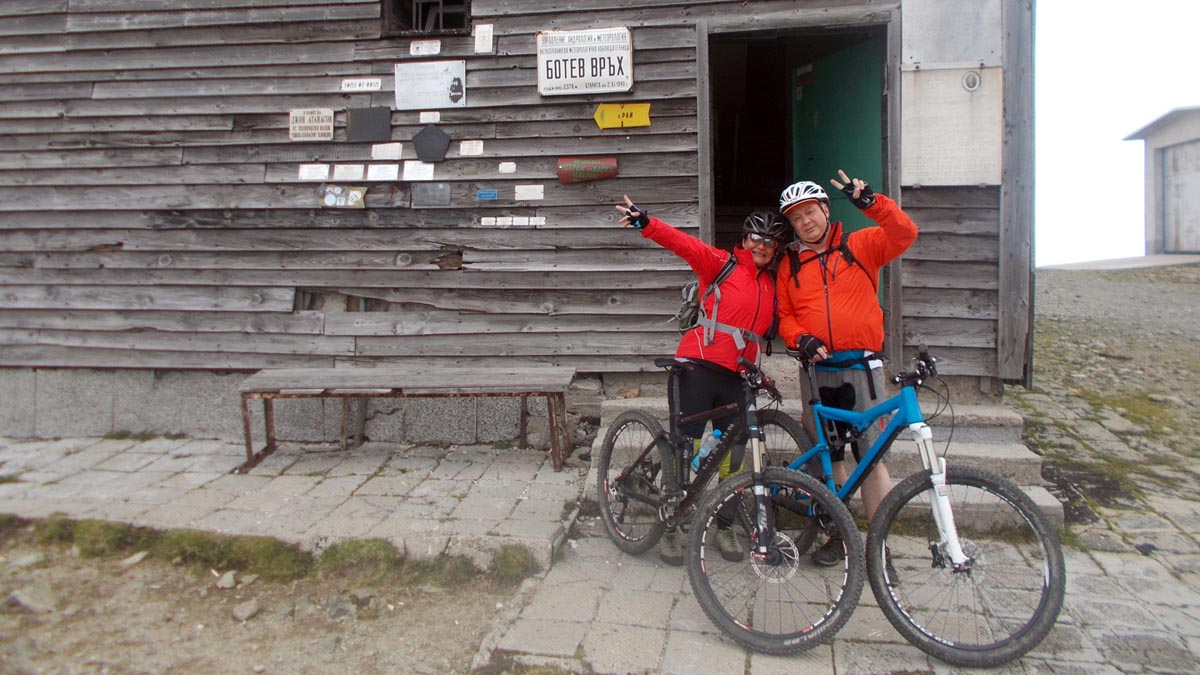 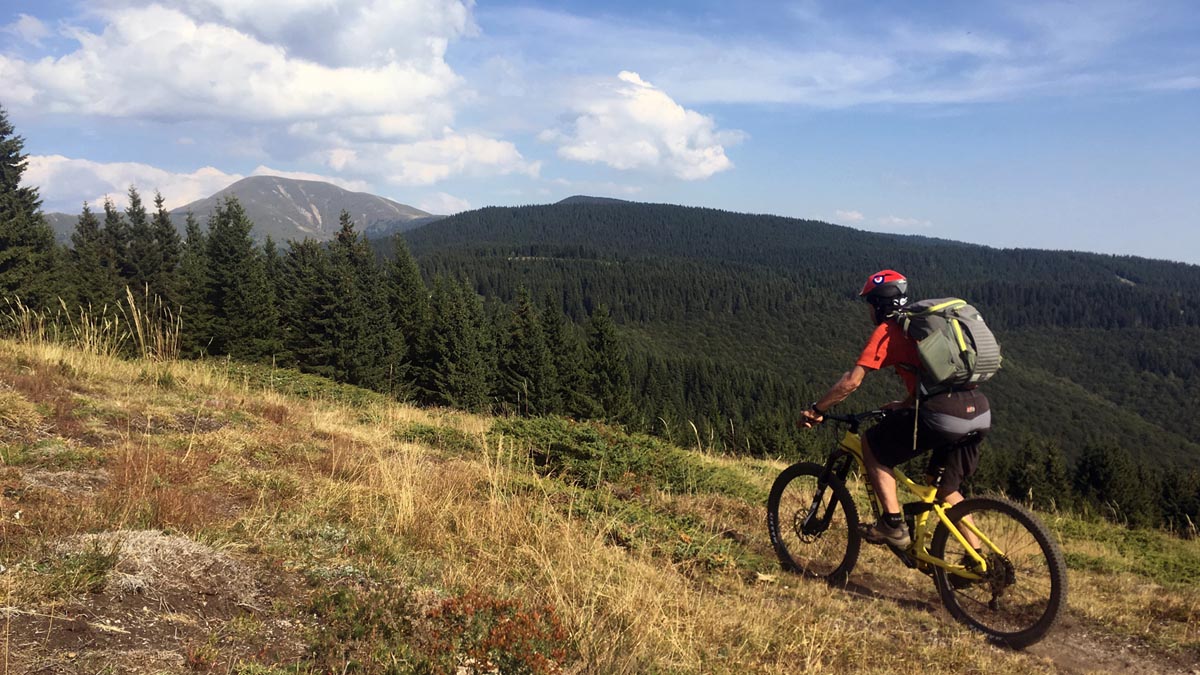 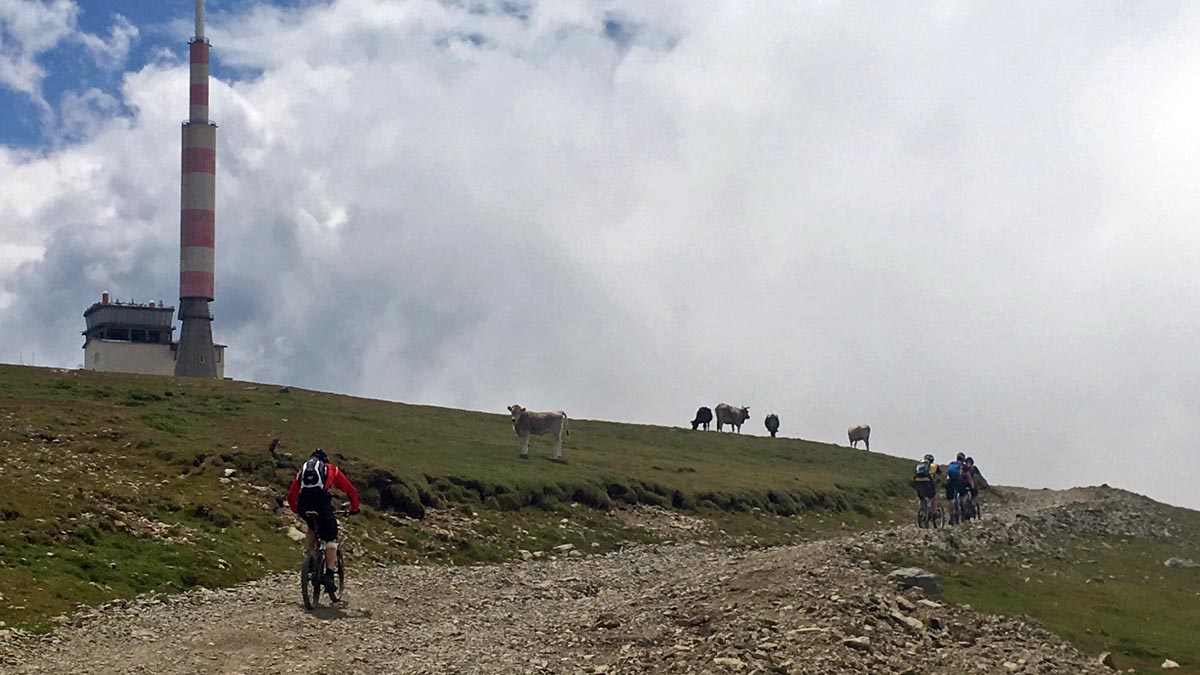 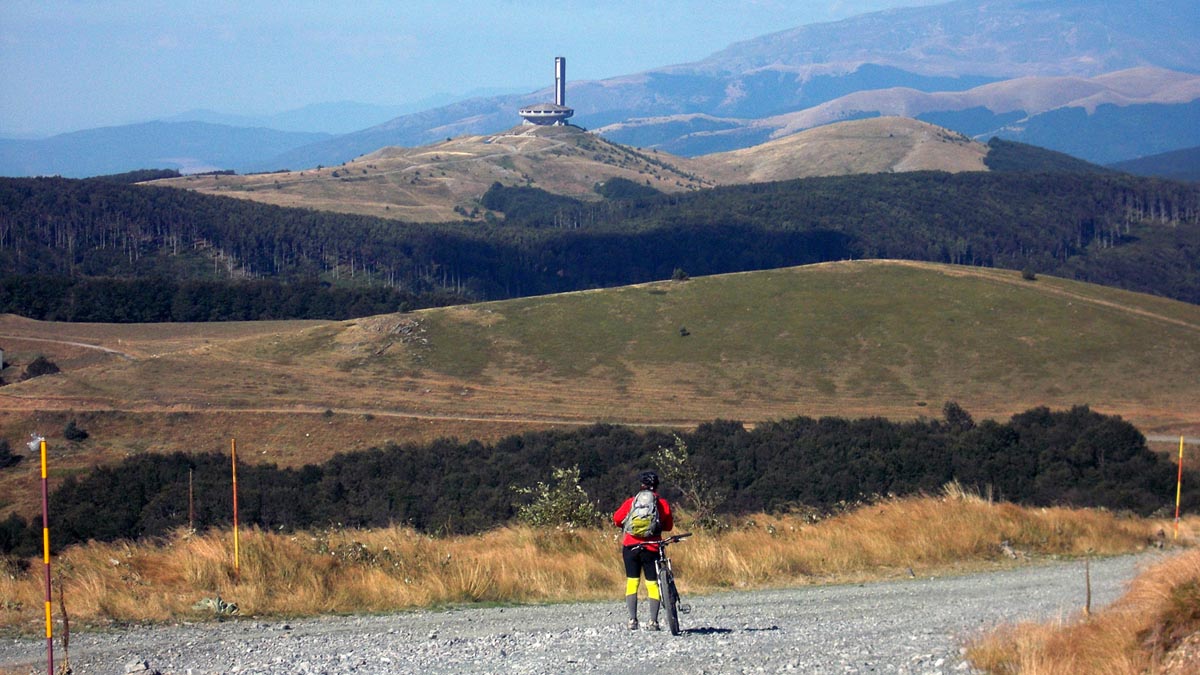 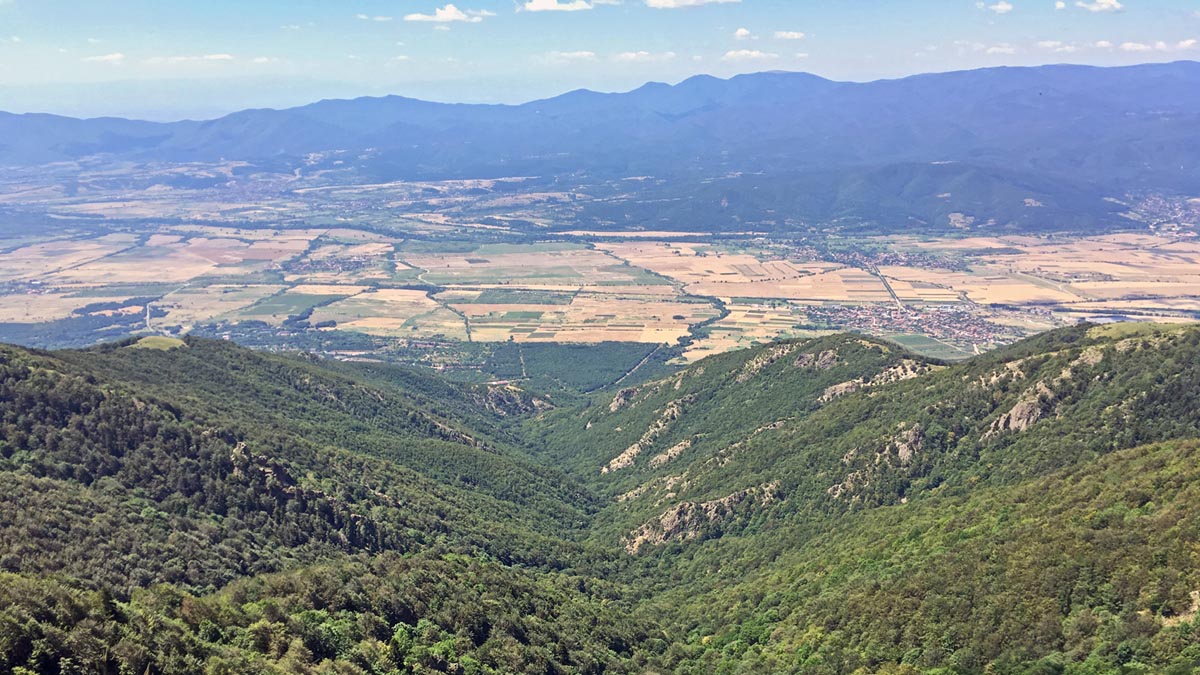 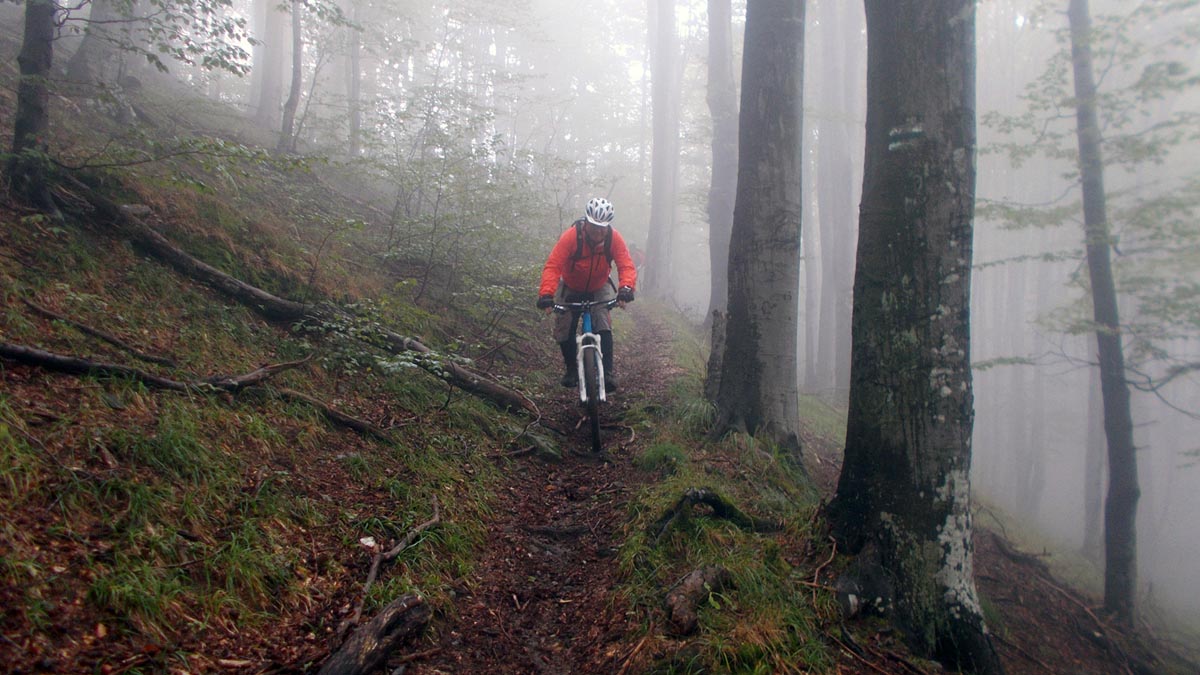 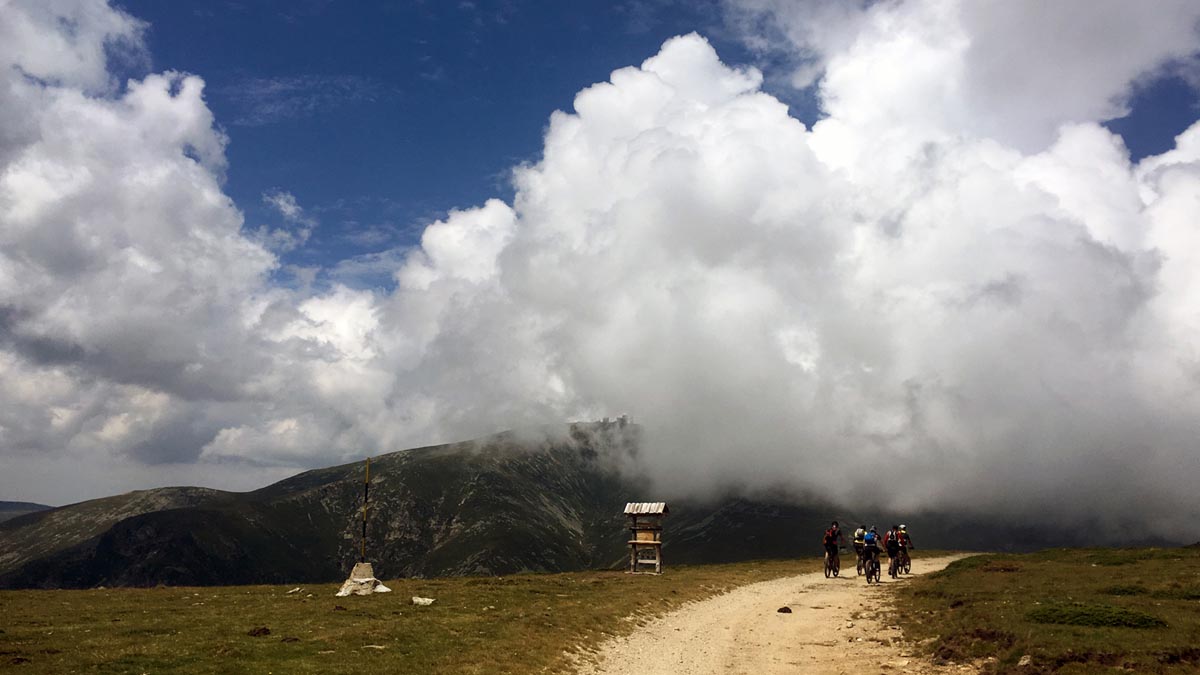 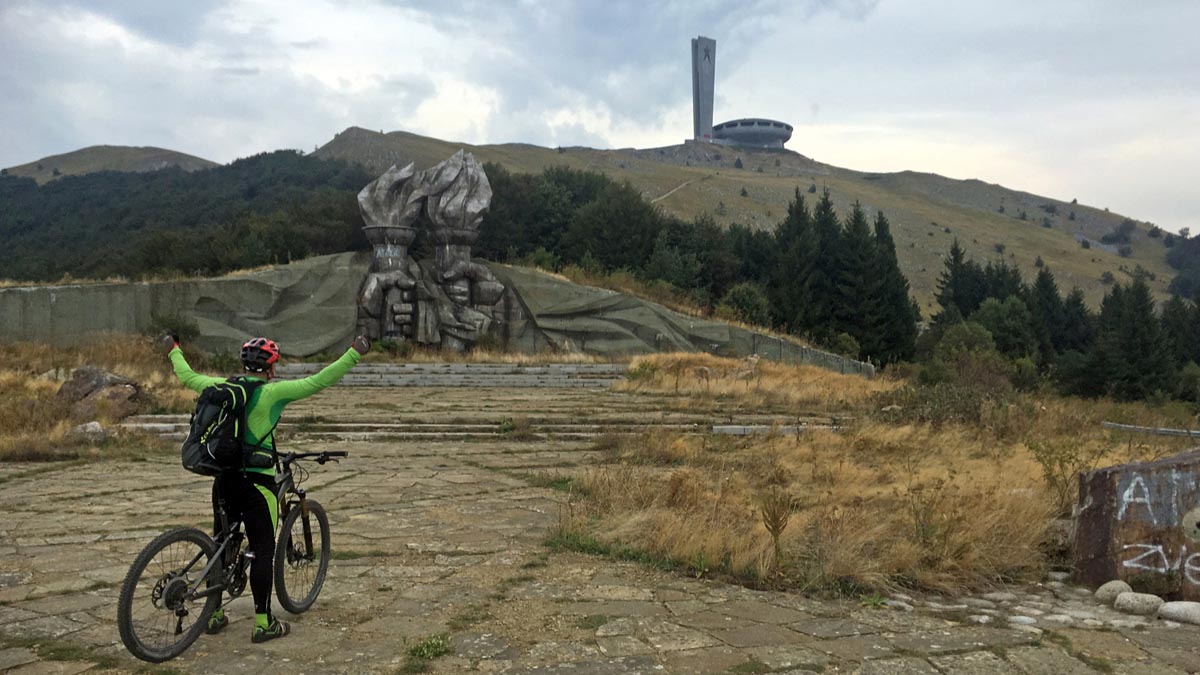 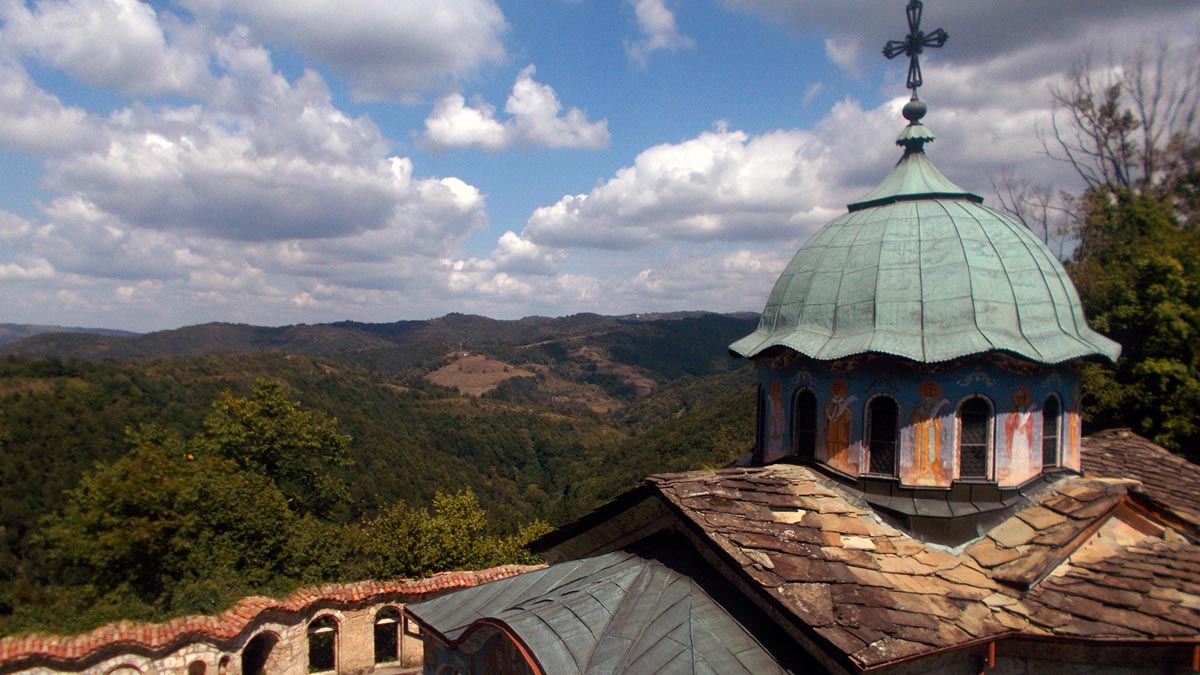 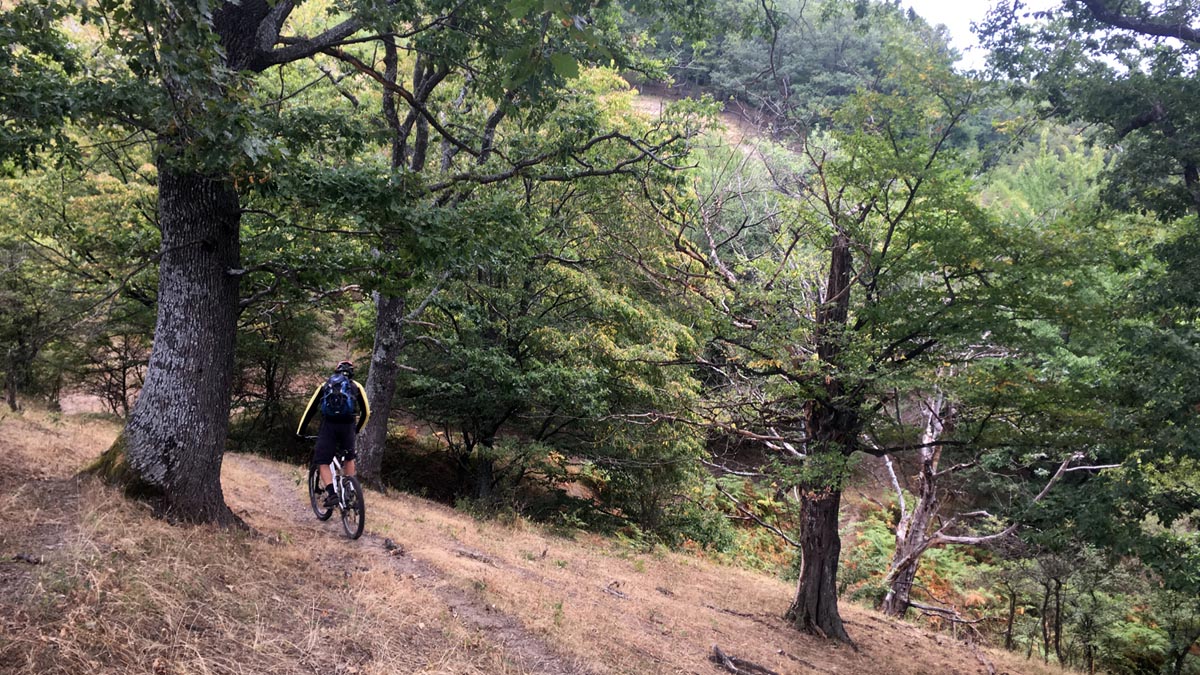 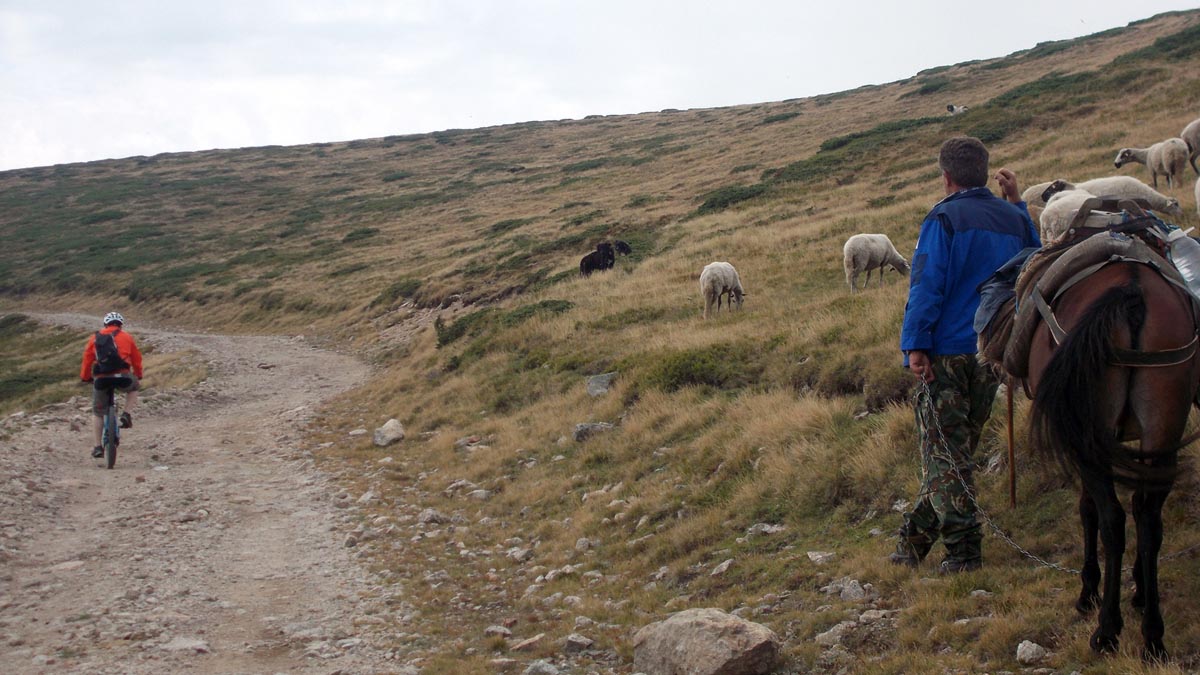 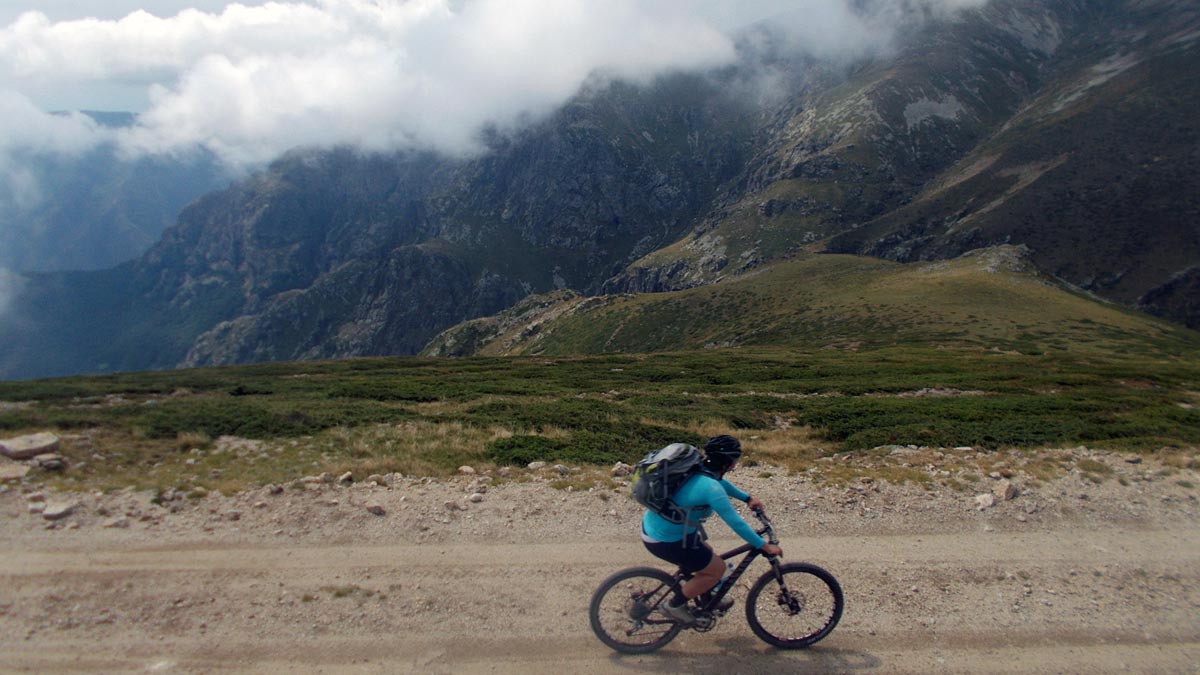 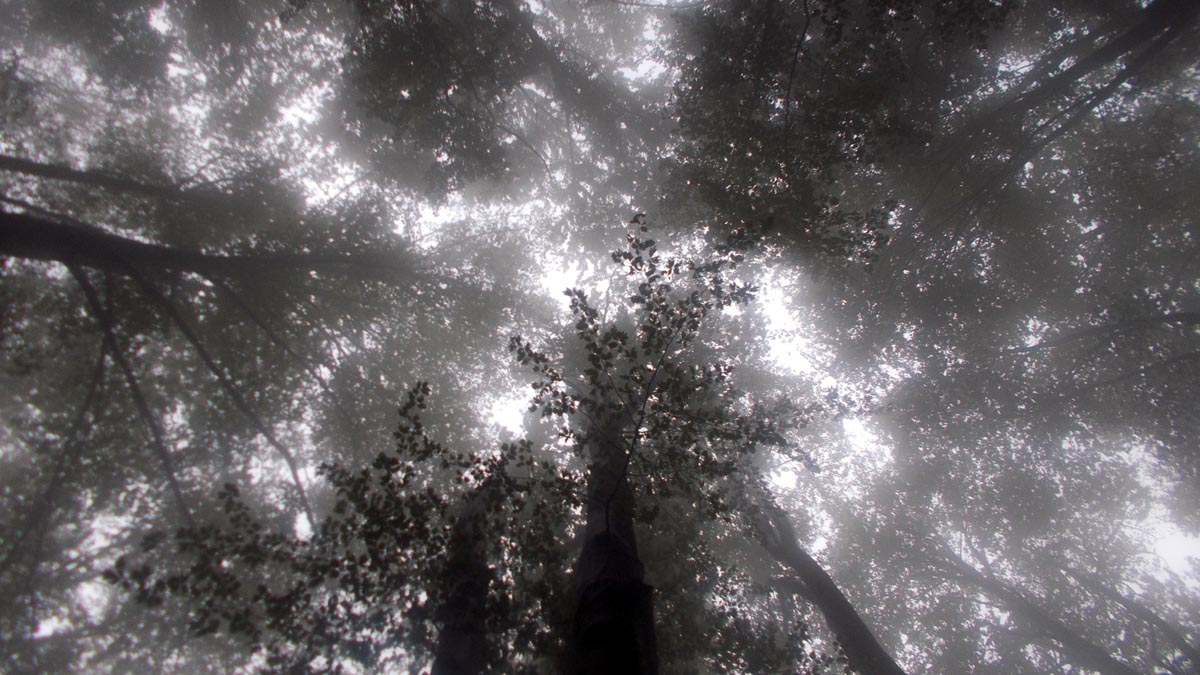 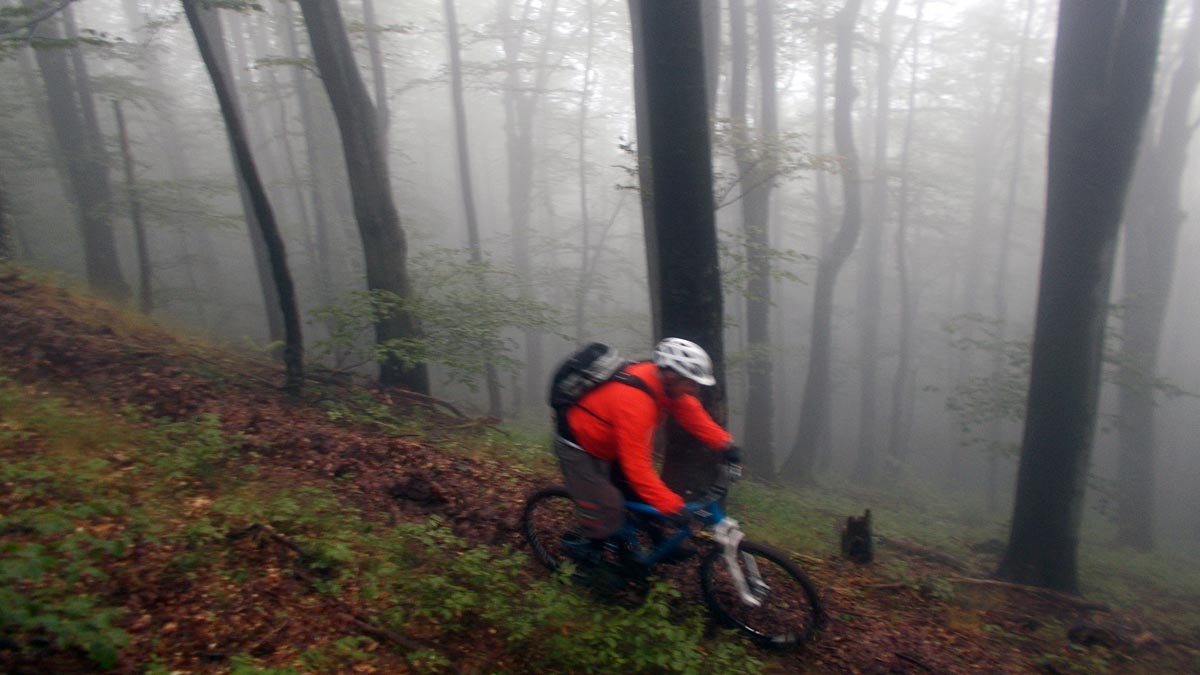 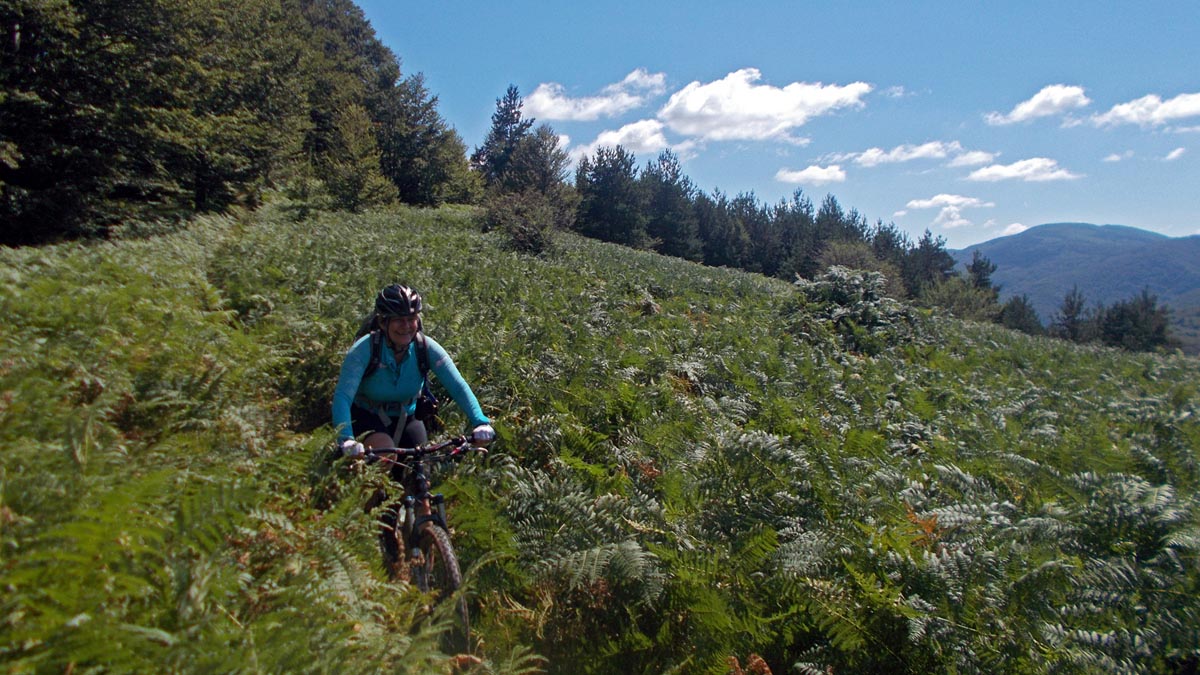 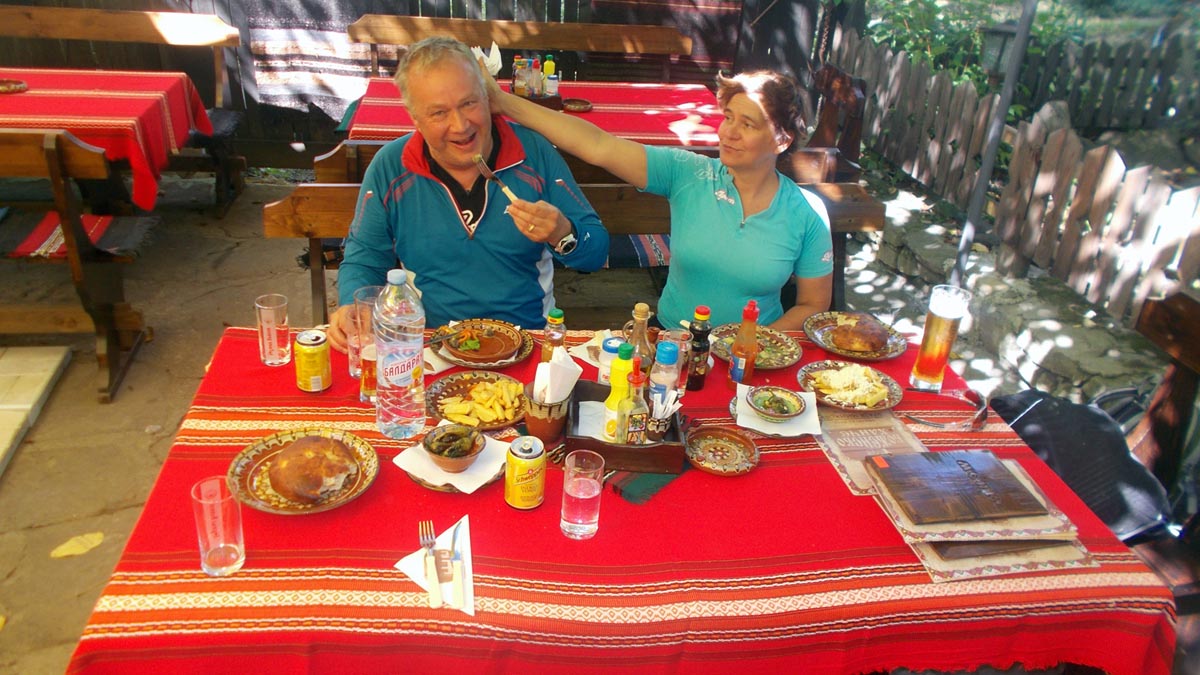 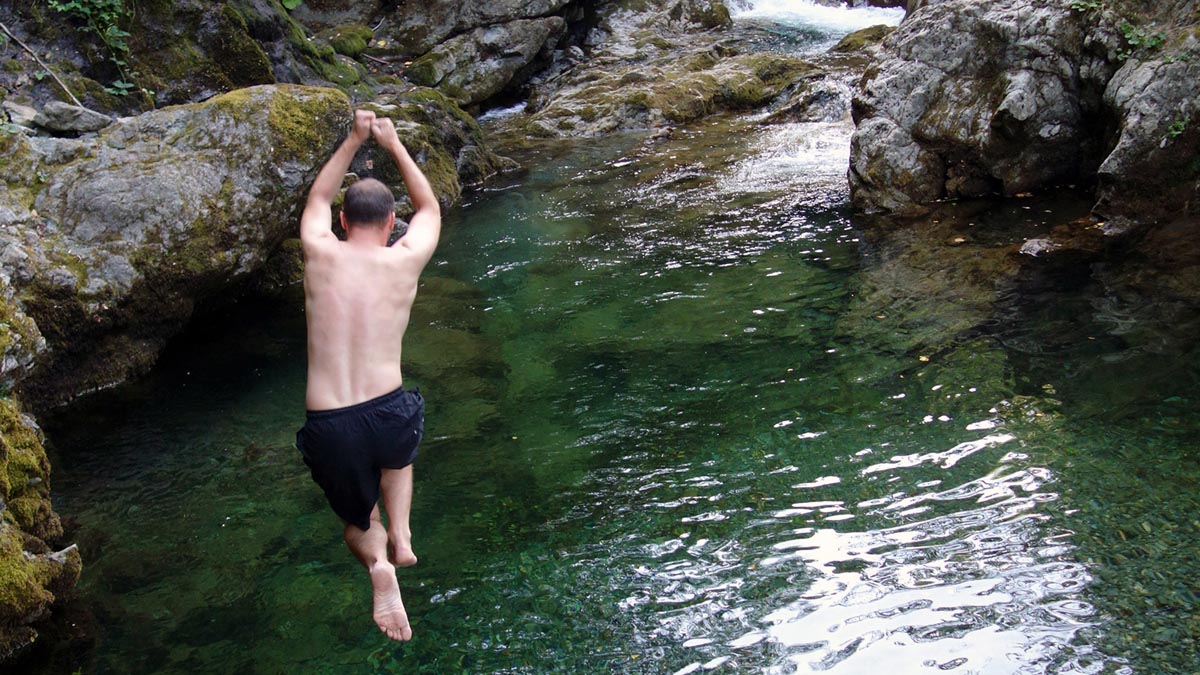 The Balkan mountain range stretches across Bulgaria, from the very Western border to the Black sea coast. It is the birthplace of brilliant writers, freedom fighters, masters of traditional handcrafts, and many historic events that took place in this region. As we have grown up in its beech forests and lush meadows we know many of its secret places, stories and legends. On our bikes we will ride alpine paths, teasing trails and roads on the Southern and Northern slopes as well as along the main ridge of the Central Balkan Mountains. Passing by many sites we will experience stories of past ages and their heroes. It’s a tour full of adventures where we can write down our own trail legends.

August 21. Arrival to the Balkan Mountains

Airport pick-up and transfer (2:30 h) to the idyllic area of Troyan at the north foot of the Balkan Mountains – the so called Fore-Balkan. Our accommodation for the first two nights is located in the middle of a beautiful natural landscape at a small neighborhood of Baba Stana. Bike setup and check, tour discussion and dinner.

Our shuttle bus takes us to the highest mountain pass in the mountains – the Beklemeto, 1525 m. It is located on the old Roman road Via Trayana, which was once known as the most important connecting road between the cities on the Danube and Plovdiv. The 35-meter-high monumental arch is visible from a distance. It marks the highest point and the start of our ride. From the high mountain roads and playful trails we look out over the “green sea” of the Pre-Balkans. Numerous valleys and hills shape the landscape until the eye can see. They are a place for living and protection for people, animals, beliefs and traditions. In the afternoon we visit Troyan monastery – the third largest one in the country. In the evening we taste traditional dishes, prepared according to old regional recipes.

We pack up our bags and move on today. After a short transfer to . Aprilzi village we start our climb to the main ridge of the Central Balkans. The old and partly washed out gravel road leads us after 11 km and 900 m to the hut of Tazha (1510 m), where we can stop for lunch. After that it goes smoothly downhill. The wide gravel path runs through old beech forests and passes the 85-meter-high Kademliisko Praskalo waterfall. For the trail lovers, there are still several flowing shortcuts that at the end bring us to the village of Tazha. 10 km remain to the end of the day’s stage. The highest peak Botev looks down on the small revolutionary town of Kalofer. It is the birthplace of Hristo Botev, one of the most important freedom fighters and poets in Bulgaria and a place where Bulgarian traditions are preserved and lived to nowadays. Our accommodation is a cozy family run guest house with a green garden and barbeque.

It is time to climb the highest peak in the Balkan Mountains – Botev, 2376 m. After a jeep transfer to a height of around 1850 meters a wide gravel road with a moderate slope leads to the top of the mountain. Countless sheep, cows and horses graze on wild pastures in summer. Steep cliffs are cut in the north and south slopes. They form the beginning of the largest nature reserve and UNESCO biosphere reserve of the “Dzhendem”. In addition to changeable weather, the summit is also known for its 360 ° panorama. In clear weather conditions, the view extends to the other high mountains in the south – The Rhodope Mountains, Rila and Pirin. After a summit photo in front of the weather station we descent quickly to the small Botev hut, located 300 vertical meters below the summit. It offers tourists warm refreshments and mostly vegetarian dishes. The further descent promises over 2000 meters of breathtaking views, sometimes demanding trails and even an unforgettable freeride on grassy slopes. At the end of the day, the shuttle bus waits at Vasil Levski village and takes us back to the accommodation.

We continue to the east, through the largest rose growing area in the country. The shuttle bus takes us quickly to the village of Yassenovo. From there we follow a picturesque river valley and after 700 m of ascend we reach the main mountain ridge. We pass the geographical center of Bulgaria – the Uzana locality. Forest roads take us to the Shipka pass (1195 m). It is a place of  great historical importance. The colossal monument and the surrounding cannons commemorate the last decisive battles against the Ottoman Empire. From the roof of the monument we enjoy the view over the Danube plain in the north and over the Rose Valley from Kazanlak. Ten kilometers further on the main ridge are the remains of the largest socialist monument in the country – Buzludzha monument. Here starts our last trail for the day. We enjoy a long descend to the village of Enina (600 m), on the south side of the mountain. There is also a fish farm as a part of our hotel and for dinner we enjoy freshly caught trout.

After the three longer stages, this day offers a relaxed biking. The shuttle bus takes us to just below the Buzludzha monument (1432 m). This huge ruin is one of the most visited places in Bulgaria. From the outside it resembles a UFO and was dedicated to the former socialist movement of Bulgaria. After the collapse of the socialist state in 1989, there were no efforts to preserve the monument, so that it has crumbled over the years and can only be viewed from the outside today. We continue cycling along the main Balkan ridge and reach a wind turbine. Narrow forest roads and trails lead to the small town of Plachkovtsi. Following a small asphalt road we reach the town of Tryavna. Time for lunch, stroll in the historic old town, past small handicraft shops, pastry shops and cafés. Only 8 kilometers separate us from the daily goal. A three kilometer long, flow forest trails finally takes us to one of the most beautiful architectural reserves in Bulgaria – Bozhentsi (530 m). The village originated from the 14th century when people sought refuge in mountainous regions during the Ottoman invasion. Our accommodation is a restored Bulgarian Renaissance house.

After half a day’s tour through the rustic forests of the Fore-Balkan, we reach the Etar open-air museum. After lunch we make a guided tour through the shopping streets and visit ancient handicraft workshops – including demonstration of historical handicrafts. In the afternoon we drive to Veliko Tarnovo, one of the oldest cities in Bulgaria and also a former capital.  Thanks to its historical richness, the city offers many interesting sights to visit experience and be amazed. We stay in hotel in the center of the city.

We take the morning for a city tour: the famous artisan street “Samovodska Charshiya” with handicraft workshops and galleries in 200 year old houses; the medieval Tsarevets castle, which was the residence of the patriarch; Architectural reservation village of Arbanasi, which is only 5 km from the city. Later we drive to Sofia (3 hours). We spend the night in a nice hotel at the foot of the Vitosha Mountains. From there we have quick connections to the city center and the mountain.

The grand finale: a bike tour that leaves nothing to be desired. After a short transfer we climb a mere 500 vertical meters to reach the highest peak “Cherni Vrah” (2290 m), which rises, over Sofia city. After a snack at the tea-house, our last day of trail pleasure holds another real treasure – a 17 km long single trail down to the capital city. After a city walk in the afternoon, our last evening of the week together allows us to share stories, emotions and memories from this bike adventure.

After breakfast it’s time to say goodbye to Bulgaria. Depending on the departure time, you still have the opportunity to explore the Balkan metropolis on your own.

In this packing list you will find what you should definitely have. We recommend for this tour a 120-160 mm full suspension Bike and tires with good puncture protection. We expect from each participant a solid preparation and a good workout as well as mastering the basics of mountain biking (central position, braking, turning, small obstacles, etc.).